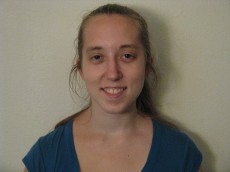 My research focuses on the use of programmable materials as a means to better understand tissue development, disease progression, and wound healing. Within the human body various stimuli—provided by cells, extracellular matrix, or other environmental factors—can directly influence a single cell’s behavior. More specifically, physical stimuli, such as the architecture or stiffness of a cell’s matrix, can trigger cellular responses. For example, the alignment of matrix fibers can facilitate the spread of breast cancer cells outside of a tumor origin site. Our lab has recently developed smart materials that allow for surface pattern, mechanical properties, and chemical composition to change dynamically during cell culture. Currently, I am developing new computational tools that will allow for microscopic tracking of cells as they travel in and on materials with these programmable changes. The combination of quantifiable computational accuracy and efficiency with dynamic environmental stimulation that externally mimics basic conditions in the body, will provide new insight into how cells develop and react to environmental change. This understanding is expected to lead to new knowledge relating to tissue development, to better understand why cancer cells behave in the manner they do, and to provide unique methods for testing the effect of changing surface patterns, stiffness, or chemical variation on cells. 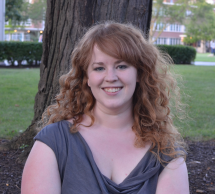 My research focuses on the use of multifunctional, programmable materials to better understand how cells respond to their mechanical and chemical environments. Our lab has previously developed substrates that alter their mechanical topography during cell culture in response to a temperature change. The lab further demonstrated that cells will dynamically alter their alignment in response to the formation of wrinkles. My work is focuses on expanding on these past accomplishments by assessing how cells respond to complex, or double wrinkle patterns along a surface. I then plan on combining these patterns with chemical cues to assess which environmental factors play a larger role in regulating cell behavior. 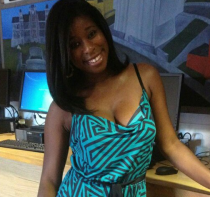 The goal of my project is to gain a fundamental understanding of the principles that govern enzymatic catalysis. My research involves using a minimalistic protein design approach to create small efficient catalysts for chemical reactions. Our parent protein is calmodulin; a calcium sensing protein very abundant in humans and animals. Currently, my target reaction is ester hydrolysis, which is a natural reaction involved in chemical processes ranging from fine chemical synthesis to biofuel production. We were able to develop a simple strategy to introduce a single histidine mutation in a protein’s active site for new functionality. Introducing a single histidine residue into a 74-residue-long C-terminal domain of calmodulin confers esterase activity on this non-enzymatic protein. Directed evolution coupled with computational analysis allowed for further improvement of protein’s catalytic efficiency. The simplicity of our design protocol should complement and expand the capabilities of current state-of-art approaches to protein design. 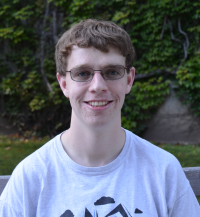 I study the formation of an organ found in zebrafish embryos called Kupffer’s vesicle. Dr. Amack’s lab has found that the proper development of this organ is necessary for the proper development of other organs in the body such as the heart and brain. Kupffer’s vesicle is often referred to as the “organ of asymmetry” because the specific asymmetric development is what drives the biological signalling process to correctly form the other organs. Kupffer’s vesicle begins as a completely symmetric ball of cells, but at some point the cells of the organ undergo shape changes to break the symmetry. Biologists do not know what drives this process, so my work involves computational modeling to investigate whether physical forces due to different intercellular tensions or due to the flow of cells around the organ are enough to generate the asymmetry seen. Similar “organs of asymmetry” are found in mice, rabbits, and humans, and are all involved in the proper formation of the heart and brain. Thus, by studying Kupffer’s vesicle, we hope to learn more about why the development of major organs is interrupted in birth defects such as congenital heart disease.

2014 Soft Interfaces IGERT Retreat presentation:  Mechanics of the Organ of Asymmetry in the Zebrafish Embryo. 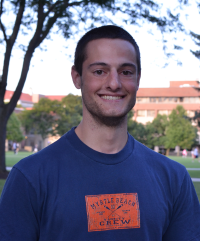 I investigate the complex interactions that occur between the body and an implanted metallic device, such as a cobalt-chromium-molybdenum (CoCrMo) hip implant, which lead to accelerated corrosion, pain, and device failure. As the number of total joint replacement surgeries increases and the age at which they occur decreases, we have a greater need to fully understand the interactions that occur when implants are introduced to the body. I use cell culture and electrochemical techniques in order to simulate and monitor the implant-body interface. Current efforts include inducing direct, cellular attack on CoCrMo alloys and investigating the effects of voltage on mesenchymal stem cell fate choice. 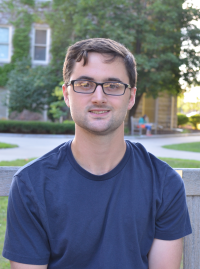 I am currently studying biological liquid crystals. I am interested in computational and theoretical approaches aimed at modeling such systems. Being in the biological realm, these forms of liquid crystals are active; usually having some form of driving at a local scale. This adds an important component to modeling such systems. The energetic demands of liquid crystalline order and the active component of these molecules provide many interesting and complex structures.

Our work has been considering the constraints placed on liquid crystal structures in confined 2D geometries, particularly in circular and annular regions. Geometrical constraints in liquid crystal systems often lead to defects. Defects obey rules of topological charge conservation that are dependent upon the constraining geometry and the type of defect. Defects can create remarkably intricate and organized structures in liquid crystals. Recently, I am focusing on developing simulations for these types of systems by considering interplay of the boundary conditions at the constraining surface and the bulk liquid crystal order. This will provide valuable quantitative insight for such systems and a better understanding of how to manipulate them. 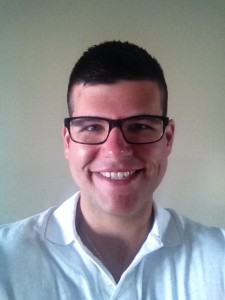 My current research focuses on investigating the collective behavior of cells on both isotropic and anisotropic substrates developed by the Henderson group . Soft condensed matter research has recently turned to such biological phenomena as wound healing and the movement of epithelial cell layers, yet not much work has been done in terms of understanding fundamental collective cell behavior, whether from a physical or biological perspective. The Turner group has developed staining methods for imaging multiple cell organelles simultaneously. As such, I am developing computational methods of tracking nuclei and Golgi to yield quantitative information regarding cell polarization on the aforementioned substrates. By utlizing the data from both the Turner and Henderson group we hope to develop a novel analytic active matter model that is consistent with observed collective cell behavior. 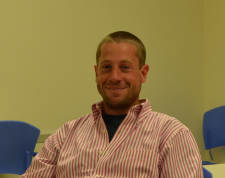 My research deals with creating structurally reinforced, stem cell-laden gelatin implants to be used for bone tissue engineering.  As no two bone fractures are ever the same, it is necessary for such implants to be fully customizable, yet highly specific.  In using the latest advances in 3D printing technology, creating such constructs is becoming more of a reality. 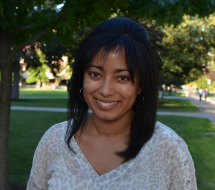 My research is focused on the development of a controlled nitric oxide (NO) releasing small diameter vascular graft composed of an elastomeric nanocomposite polymer system. NO is an endogenous molecule normally present in healthy blood vessels, providing both vascular homeostasis and thromboresistance. The challenge after a vascular surgical procedure is that it eradicates this NO presence, leaving any implanted graft at risk for low patency, especially in smaller diameter grafts for bypass grafting. The goal of my research is to overcome this challenge by producing a vascular graft capable of restoring NO to the surgical site and promoting endothelialization within the lumen. We hypothesize that this kind of controlled NO delivery can be achieved through a novel fibrous elastomeric composite polymeric biomaterial construction fabricated using an electrospinning process that can offer tunable, long-term NO release.  Several techniques are being implemented to study the graft mechanical properties, NO release profile, as well as the biological interactions with the graft material.